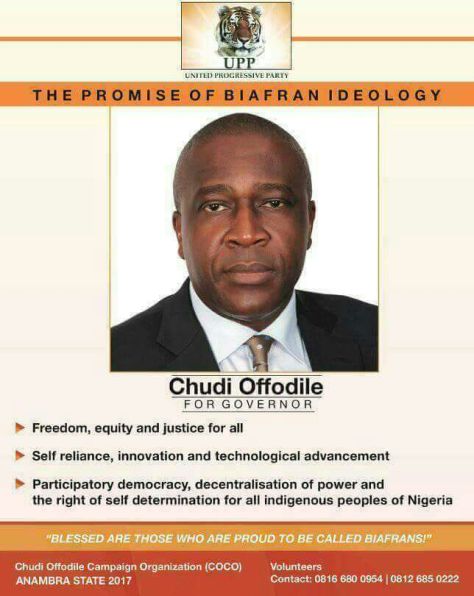 When Hon Chudi Offodile, Awolo-Awka, was elected into the Federal House of Representatives in May 1999, as the representative for Awka North and South Federal constituency of Anambra State, he was just 34 years old. He served as the Chairman of the Special Committee on Joint Venture Oil Operations [2001-2003] and Chairman of the Public Petitions Committee [2003-2006]. He is also a businessman, lawyer and notary public.

He ran for senate in 2007 and 2011 unsuccessfully and called it quits with “electoral politics”. Then he bounced back with the best seller ‘’The Politics of Biafra and the Future of Nigeria’’ published by Safari Books Ltd in 2016. The book has seven “Parts” that are sub-divided into twenty “Chapters”. Part One titled “Prelude To War” contains four chapters: Preview; Igbo identity Crises; The 15th January 1966 Coup; The 29th July 1966 Counter Coup. Part Two titled, “Period of hostilities” comprise: On Aburi We Stand; The Biafran Intelligentsia; Biafra’s Non-Igbo Actors; Britain and the Horrors of War.

Fast forward to 2017, Anambra’s year of election, Hon Chudi Offodile has returned stronger and better and is always a formidable opponent. He came fully prepared to become Anambra state Governor at the end of November elections with his new mantra “The Promise Of Biafran Ideology” on the platform of the United Progressive Party, UPP led by the ebullient and dynamic National Chairman of UPP, Chief Chekwas Okorie. UPP has already formalized a merger between members of the party and a section of All Progressives Grand Alliance (APGA) starting from Enugu State.

The Chairman of the harmonization committee and the deputy National Chairman of UPP, Chief Chris Uche, said that the same exercise had also been perfected in Abia, Anambra and Imo, adding that Ebonyi had no issues as the entire APGA structure in the state had collapsed into UPP.

The ratification of the state working committee is expected to take place at the forthcoming National Convention holding on the June 29th, 2017 in Awka, Anambra State.

And barring any hitches, Hon Chudi Offodile would be declaring his Governorship ambition during the convention. He does not believe in the so-called zoning along the three senatorial districts, North, South and Central since none of the governors, past and present represented their senatorial districts while in office. They all represented their local government areas and catchment areas.

He illustrates this by pointing out that they all spent billions of Naira of state funds awarding contracts for road construction in their villages and local governments and all of them appointed their commissioner for works from their local government areas. Dr Chinwoke Mbadinuju from Uli, Ihiala, appointed Ken Emeakayi from Ihiala LGA and they spent most of the state resources on roads in Uli and Ihiala. They did not represent the south senatorial district. Dr Chris Ngige from Idemili appointed Arch Emeka Ejikeme from Idemili as works commissioner and the preponderance of the roads done during his tenure was concentrated in that area. He did not represent central senatorial zone but his village, Alor and Idemili area.

The longest serving of them all and perhaps the most successful, Mr Peter Obi from Agulu, Anaocha local government appointed Arch Calistus Ilozumba from Anaocha and the evidence of who they represented is found in the state of the roads in Peter Obi’s village, Agulu and the entire Anaocha LGA from Neni to Obeledu to Agulu-Uzoigbo etc. Compare that with the state of roads in the so-called state capital, Awka or in Awka North and other parts of Anambra Central senatorial zone. To make matters worse, the one position the entire central zone has in common is the Senate seat. They made it an Anaocha affair. From the late Dora Akunyili to Senator Uche Ekwunife and now Sir Victor Umeh. Peter Obi’s tenure was the tenure of Agulu people and Anaocha LGA not central senatorial zone.

Now to Governor Willie Obiano. His commissioner for works is from his village, Aguleri. He is Chief Law Chinwuba. Everyone in the state knows that almost every appointment goes to the governor’s village and local government area and they say he is representing the North. That is a false claim. “So there has been no zoning but primitive clannishness”, he said.

I was personally taken aback by his position and he indeed made me believe that there was nothing like zoning. And after subjecting it to critical analysis, I discovered that my area Awka North has been abandoned to only God knows when.

This 2017 November election according to Offodile is between two zones, those who believe in the Biafran ideology and those who don’t. “This is the turn of the Biafra zone”. He said.

What exactly does he mean by “Biafran Ideology” I asked? Offodile explained that the “Biafran ideology is the antithesis of Nigerian centralism which has denied Nigeria of its creative abilities, making it import dependent with corruption as a national pastime”. Biafra on the contrary was innovative and self-reliant and exhibited technological abilities. Its very existence was prompted by the idea of freedom and justice and the expression of the right to self-determination. Biafra’s national political creed enshrined in the “Ahiara Declaration” emphasized participatory democracy and decentralization of power. With the evidential failure of the post war Nigerian ideology of centralism, he continued, “I am simply offering the Biafran ideology as an alternative vision”.

Hon Offodile is aware of the tough contest he faces in the UPP with the entry of Former Aviation minister, Osita Chidoka, Ifeanyi Okonkwo and others but he believes that he will prevail in the fullness of time. He concludes with the words, “blessed are those who are proud to be called Biafrans”.

Awolodike as you challenge the already existing narratives in the forthcoming Anambra Governorship election, I can only wish you luck. You are resolute and I like your guts!