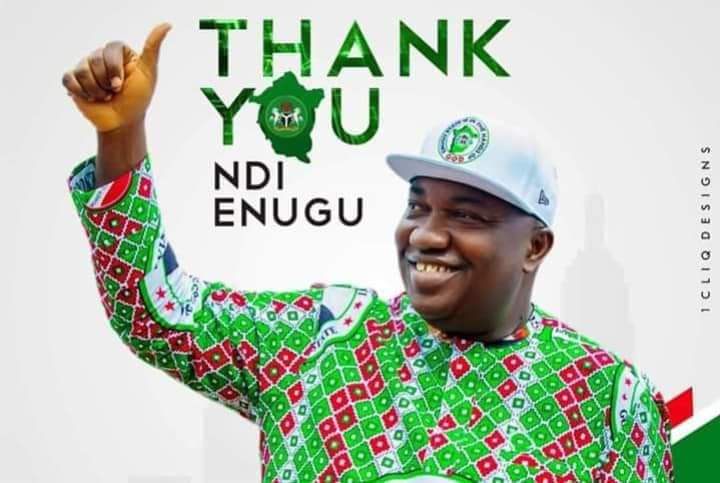 Argue with your keyboard till tomorrow, I have never seen someone as peaceful, humble, loving and caring as Governor Ifeanyi Ugwuanyi of Enugu State.

His empathy and sympathy for the needy and less privileged could be compared to that of Mother Theresa, whose empathy and peity remains marchless.

No wonder he deflated the opposition parties in Enugu State without a fight.

No wonder the hierarchy of the opposition parties like APC in the State could not resist the temptation of attending Ugwuanyi’s inauguration even when their party was supposedly challenging his victory in court.

As human, he may not be good in all aspects but when it comes to Peace Keeping, Governor Ugwuanyi of Enugu State, is the best in Nigeria.

He understands the importance of peace in delivering democracy dividends to the citizens and has been paying the prices to maintain peace in Enugu State.

The man, His Excellency Dr. Ifeanyi Lawrence Ugwuanyi, treat all people with love and kindness, regardless of race, gender, religion, party affiliation etc.

He is always fair to others no matter what it will cost him.
To him, Peace means giving up the love of power for the power of love.

With this, Ifeanyi Ugwuanyi is a leader that posses a clear vision, very humane, courageous and selfless.

Great leaders help people reach their goals, they are not afraid to hire people that might be better than them and take pride in the accomplishments of those they help along the way.

Governor Ugwuanyi listens to others without condescending, always willing to hear what others have to say without rushing to judgement.

Very patient and genuine in his desire to understand the thoughts and feelings of the people he leads.
True leaders are forthright with their people.

He allows for the creation of a foundation of fairness and openness, Communicate constantly and exhibit strong and active listening skills.

He desires to have an intimate knowledge of ones emotional state and knows his strength and weakness.

Above all, Ugwuanyi is deeply a religious man, who has thirst for God and his righteousness.

His slogan “Enugu is in the hands of God” was imbued by his belief and conviction that God is Supreme and with God Enugu is safe.

True to his belief and conviction, Enugu has remained peaceful and safe even in the face of global pandemic.

He is a worker friendly Governor who has been consistent in trying to ameliorate the sufferings of the workers even in the midst of economic crunch.

Love him or hate him, Ugwuanyi is an uncommon leader in a trying time.

One thought on “Governor Ugwuanyi; An Uncommon Leader in a Trying time, by Johnpaul Anih”