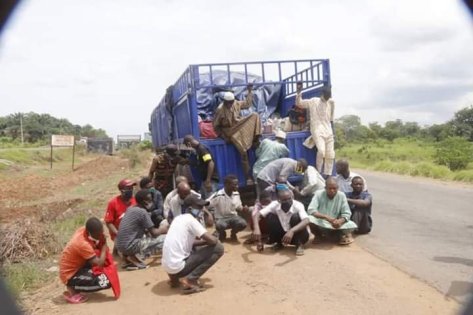 LEADER of the Yoruba World Congress, YWC, Professor Banji Akintoye, yesterday, warned that the southwest will no longer tolerate the influx of Almajirai into the zone saying that most of them have been infected with the coronavirus.

He, however, called on the South West governors to tighten the border patrols in their respective states to prevent the influx of the Almajirai.

Akintoye spoke with Vanguard in an interview.

His words: “The northern governors seem to have woken up from the Almajiri problem created by the northern culture.

“Now, they are forcing the Almajiri to go back to their places of origin but many of them don’t want to be taken back. So, many are finding their way southwards.

“It is a very terrible situation because these are not just ordinary times. Coronavirus is out there, and it is massive in the north, so most of those who are fleeing do not want to be taken back to their places of origin, they choose to roam wherever they want and most of those coming southwards are infected with coronavirus. We do not know how many of them are infected with coronavirus but we know that some of them are.

“So, they are bringing for us in the south a very complex problem because already, we, the southwest, are the gateway to Nigeria. Almost all of the contacts with the outside world come through Lagos. We are only lucky that we have governors, who are rising to the task of tackling the coronavirus especially the governor of Lagos State.

“I want to congratulate our governors for turning them back. All I will ask them to do is to strengthen the border patrol and send every one of them back to where they are coming from.”

Meanwhile, operatives of the Nigerian Security and Civil Defence Corps, NSCDC, yesterday, intercepted two trucks conveying no fewer than 70 people from the northern region at the Ogbomoso area of Oyo State.

According to NSCDC, the two trucks, which were accosted at 12:52am, were heading towards Lagos and Ibadan.

Vanguard gathered that the northerners were coming from Kano, Kaduna, Katsina and Zamfara States.

They were arrested following a directive by the Oyo State Commandant of NSCDC, Alhaji Iskilu Akinsanya that the elite forces of the corps (Agro Ranger) should beef up security at the border and the state.

Confirming the arrest, the Public Relations Officer of the command, Mr. Olusegun Oluwole, said the people were intercepted at the High school area in Ogbomoso, Ogbomoso South Local Government.

Oluwole said: “In a bid to checkmate the influx and spread of dreaded disease COVID 19, the state Commandant of NSCDC, Oyo State Alhaji Iskilu Akinsanya mandated the elite forces of the corps (Agro Ranger) to beef up security at the border and the state.

“At around 1252hrs three trucks, loaded with Hausa men coming from a northern state, were intercepted at High school area in Ogbomoso, Ogbomoso south local govt.”

Giving a further breakdown, he noted that “69 males and a female were all detained. The 22-tyre truck with registration number KBK 826(Kano) conveyed 25 Hausa men and a woman with seven motorcycles. The destination is Ibadan (Bodija).

“The second and third trucks are 16-tyre trucks with registration numbers KTG 137 ZZ (Bauchi) and AE 61 KKR (Kastina) from Funtua Kastina, heading to Lagos (Alaba). They all conveyed 16 and 28 Hausa men with four and six motorcycles respectively.”

After investigation, the PRO added that the people had been sent back to Kano, Kaduna, Katsina and Zamfara States.

Also, no fewer than 23 Northerners have been arrested while sneaking into Ondo State in a cement trailer.

Vanguard gathered that they were intercepted by the Vehicle Inspection Officers VIO at Igbara-Oke along Ilesha-Akure highway.

The northerners have been asked to return to the spot where they were picked up by the driver.

Special Adviser on Transport to the state governor, Mr. Tobi Ogunleye stated that the occupants “were heading to nowhere in particular in Akure when the vehicle was intercepted.”

Ogunleye said: “The driver of the truck who spoke in Hausa language explained that he was asked to drop the people in Akure by some people who stopped him along Ilesha/Akure road.

“The driver said he was in Ile Ife, Osun State to drop a cement consignment and was heading towards the North when they begged him to drop them in Akure, while most of the people in the truck said they have no place in mind to settle down.”