Patrick Eholor, a social crusader and President of the One Love Foundation, a non-profit making organization, here bares his mind on trending issues in Nigeria.

We have two palliatives that the federal government has announced. One was the Central Bank of Nigeria(CBN) approval of N50billion to assist businessmen so that those badly affected by covid-19 would benefit and their would be a reform in our economic system. The money is there but nobody has been able to access it. The N100billion is meant to be invested in the health sector so that we can have our own local medicine like another African country, Madagascar, that has a cure for covid-19 using a local leaf we call dogonyaro here in Nigeria. But the issue in Nigeria is that even when somebody dies and you are about to bury the person with dignity. Many Nigerians, mostly politicians, if you are not watchful will take the cloth off the dead body for their own selfish end and deny the dead body the right of dignity. I am not sure if this N100billion will get to those manufacturers who want to proffer solution to the pandemic. You also recall that the Uniben were the first to proffer a solution for the covid-19 when the Engineering Department manufactured a ventilator that was so expensive and some other universities in the South West followed suit. As we speak, the government has not fund the project. The Nigeria government is, without any apology, a copy and paste. When they hear that other governments come out with a measure they follow the measures without practicalising it. The banks are liable for this. Most of them are fraudulent. When you bring such large sum of money to invest in the health sector there thinking is to put it in fixed deposit or mutual fund to be accumulating interest to the detriment of the citizens. Those who are supposed to go after them, the police, ICPC, EFCC and others are also culpable. So, we are in a state of quagmire.

What has always succeeded in Nigeria is corruption. Whether in the banking sector, the church, the electricity distribution companies and government parastatals we all agree on chop my own and let me chop my own. If the Access Bank is sincere charity begins at home, it knows its customers BVN. It would have at least paid money into its customers account to cushion the effect of the pandemic. But because Access Bank knew that it was going under, that there is no more stolen money, oil is no more selling. It gave the government the money to divert attention so that when the Nigeria Deposit Insurance Corporation(NDIC) is going after the people who have defrauded the bank and the bank know its negative effect. So that when it is going down it wants to have a soft landing as it has given billions of naira to the government. It was not giving out money for palliative measures to the citizens as it claimed. Why will you give such a huge sum of money to the government which is not responsive to the citizens and you’re firing your workers who have been dedicated to the company over the years. It doesn’t make sense. 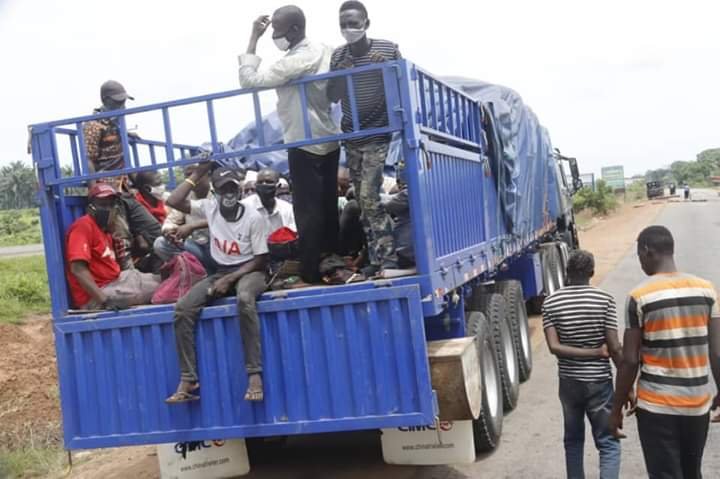 On massive migration from the north to the south

Let us be very careful how we approach issue of the north and south. Unfortunately, the northerners, especially the almajiris, are victims of circumstances. They have a very bad leader who has been able to brainwash them with Usman Dan Fodio doctrine that when you are poor you remain poor and when you’re rich you remain rich. It is not in the Holy Koran. I have read it well though I am not a Muslim. I have also read the Bible. From the beginning of the world there has been human migration. I migrated to Canada. Why did I migrate? For economic reasons as I saw that there was no future in Nigeria. I took all the necessary risk and migrated. If the people in the north are migrating to the south they have all the rights as citizens. The constitution allows any Nigerian to seek for employment, to reside anywhere he chooses in the whole of the country. The idea that they are flooding the south as Boko Haram is nonsense. If the people who have stolen from us, own oil wells and neglected their people make them to migrate to the south for economic reasons we should accommodate them. We have always lived peacefully with the Hausa/Fulani people. It’s because of these unscrupulous politicians that we are having this tussle between us. I have a gateman in my house, Bashiru, who has worked with me for twenty years, he is a northern and I treat him like my son. There is no difference between the north and south. I schooled with some northerners and easterners who are easygoing people. When the present looters of our treasury want to cover up their trash they resort to ethnic sentiments just to cover their trash.

Recently, the demolition of a hotel in Rivers State by Governor Nyesom Wike has generated a lot of reactions. Why did people not make such protest when Kaduna State governor, Nasir El-Rufai, did a similar thing. Wike is very controversial. It is only in Nigeria that he will make news. If there is anyone with a low IQ Wike is. You cannot be a lawyer and not be law abiding. He is also married to a judge. As a state governor he has law enforcement agencies under his control. They should be allowed to carry out their assignment of enforcing the law and arresting anyone not adhering to it, take them to court and secure judgment. He was elected as a governor not as an emperor. I thank God that I am from the cradle of civilization, Benin Empire. Nobody does that in my empire because we are all equal.