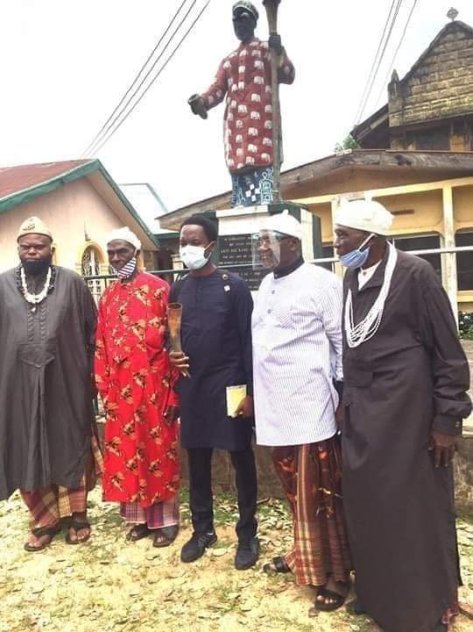 A presidential delegation yesterday visited the ancient town of Arochukwu in Arochukwu LGA of Abia State. The tour was facilitated by Abia State Government.

The delegation led by President Muhammad Buhari’s photographer, Mr. Bayo Omoboriowo and his team landed on a chopper at ASCETA field and was received by the Transition Committee Chairman, Mazi Jideofor Kanu, who represented Abia State government.

Mr. Bayo was on the trip to take record of relics and artifacts especially in the Arochukwu caves.
He acknowledged that Arochukwu Ancient Kingdom is a historic place with the Ibini Ukpabi (Long Juju as a tourist attraction) which is recognized Nationally and internationally adding that he hopes to explore the nature and wonders of the caves.

The team first paid homage to the Eze Aro’s Palace and then visited the Ibini Ukpabi caves (Long Juju).

The documentation will be compiled and published as a book in honour of Nigeria at 60 to be launched on the 1st of October 2020 by the president.

In his welcome speech, the host and Transition Committee Chairman, Arochukwu LGA, Mazi Emmanuel Jideofor Kanu commended the team for the visit to Arochukwu and assured that ibini ukpabi information will enrich the documentation, adding that the ancient town of Arochukwu as the cradle of igbo civilization had a number of tourist locations that are waiting to be harnessed. He called on the Presidency and the ministry of Tourism to develop these sites as they will help boost the economy of the nation.