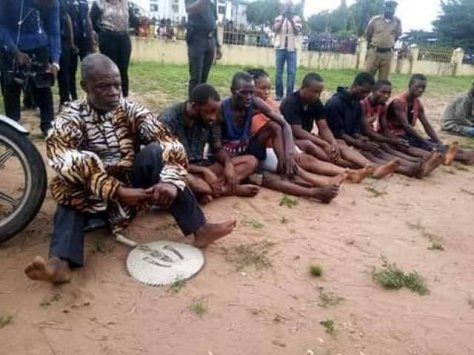 Armed robbers and kidnappers have in the last one month wreaked havoc in Imo State.

Armed men have been running riot in the capital city of Owerri and have kidnapped many residents, including the Auxiliary Bishop of the Catholic Archdiocese of Owerri, Most Rev Moses Chikwe, and a Catholic priest, Rev Fr Valentine Ezeagu. The gunmen also killed two siblings and two policemen.

The killers had on December 6, 2020 killed Chidiebere and Tochukwu Anyanwu at the back gate of the Imo State University in Owerri and made away with their Ford vehicle and also shot two persons who were in company with the siblings.

The injured persons were rushed to the Federal Medical Centre, Owerri. The killing of the siblings caused panic in the state capital and various groups called on the police to apprehend the fleeing killers.

Also on December 16, 2020, gunmen kidnapped Fr Ezeagu at Umulolo in the Ideato North Local Government Area of the state. The priest was on his way to Anambra State for his father’s funeral from Umuahia, Abia State, when he was abducted.

The priest was, however, released the next day as he reported himself at a police station in Okigwe. His vehicle was recovered from a forest in Arondizuogu.

The kidnap of the priest caused ripples in and outside of the state as the Umuahia Catholic Diocese called for the unconditional release of the priest.

On Christmas eve, gunmen killed two policemen and a chieftain of the Peoples Democratic Party, Soludo Akwaeke, in the Orsu Local Government Area of the state.

They also made away with the politician’s vehicle and the cash he withdrew from an Automated Teller Machine in Orlu.

The killing of the policemen was a big blow to the state police command and made the security personnel to have an unpleasant Christmas celebration. Members of the PDP family in the Orsu Local Government Area of the state were equally in a sorrowful mood during the Yuletide.

Came the big one on December 27 when gunmen kidnapped the Auxiliary Bishop of the Owerri Catholic Archdiocese, Most Rev Moses Chikwe, and his driver, Ndubuisi Robert, at the World Bank area of the state.

The rampaging gunmen also kidnapped a lady before zooming off to an unknown destination. Hours later, the vehicle of the prelate and his Episcopal regalia were parked in front of archdiocesan headquarters in Owerri.

The kidnap of the bishop elicited reactions from within and outside the country. The political class, the Christian Association of Nigeria and the Catholic pontiff, Pope Francis, called for his release, with the Pope making a special appeal for Chikwe’s freedom in his crossover prayer.

Luckily, the bishop was rescued from a creek between Imo and Rivers states. He and his driver were freed after an operation that lasted hours.

The police spokesperson in the state, Orlando Ikeokwu, who confirmed the release of the bishop and his driver, said some suspects were arrested.
On December 29, kidnappers abducted a motorist at the ever-busy Wetheral Road in Owerri and sped off with him on the Aba Road.

On the same day, some hoodlums trailed and kidnapped another motorist at the Amaraku junction in the Isiala Mbano Local Government Area of the state and zoomed off with him on the Nkwerre-Orlu Road, abandoning his Highlander SUV. The incident happened around 9pm.

Last week, gunmen killed a businessman, Mr Leo Anuforo, his driver and two policemen at a boundary between Imo and Rivers states.

Our correspondent gathered that Anuforo, who was the Chief Executive Officer of Loraj Consult Limited, was killed by assalintts.
The victims were killed by gunmen who trailed them to the scene.

The men were travelling in a white Toyota Hilux vehicle when they were killed.
An Owerri resident, Kinsley Madu, said the security situation in the state was as a result of “frustration.”
“The frustration in the state is much. There is hunger in the state. No payment of salaries and the government seems unperturbed about the welfare of the people of the state,” Madu stated.

Another resident, who identified himself simply as John, said the #EndSARS protest and the COVID-19 pandemic contributed to insecurity in the state.
But Ikeokwu said criminals had not overrun the state.

Ikeokwu stated that people should commend the police for rescuing the auxiliary bishop and policing the state better.

A community leader, Kingsley Oguine, said that the insecurity in the state could be attributed to the lack of patience by the youths of the state.

A journalist, Jude Owuamanam, said bad governance was the major cause of insecurity in the state.
According to him, when people are not financially secured, they must do everything to make money.

The journalist said, “Environmental insecurity is also a major cause of insecurity in the state. When the environment is not favourable it makes people insecure. There is no social security. There is no electricity. There is no family in Imo state that does not spend at least N1,000 in paying of fuel for domestic use every day.

A youth leader, Igboayaka O. Igboayaka, said the government was insensitive to the plight of the people of the state.

The Senior Special Assistant to Governor Hope Uzodimma on Print Media, Modestus Nwamkpa, said his principal was committed to securing the state.

The governor’s aide said Uzodimma had established the Operation Search and Flush and gave it many operational vehicles and other logistics to the police.