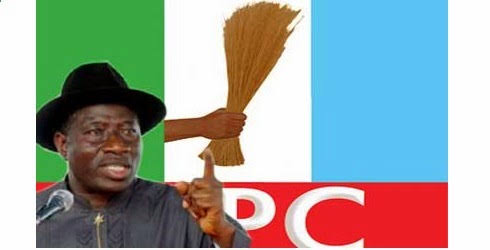 The All Progressives Congress has denied speculations that it was wooing former President Goodluck Jonathan to contest the 2023 Presidential Election on its platform.

There were media reporters last week that a group of Northern Governors were working towards making Jonatan contest the elections to serve a single term of four years after which power will return to the north.

Yobe State Governor, Mai Mala Buni, who is also the Interim National Chairman of the APC, denied the report in an interview with the Hausa Service of the British Broadcasting Corporation monitored in Kaduna on Wednesday.

He said, “Those peddling such information are afraid. But for now, there is nothing in the APC that has anything to do with the aspiration for 2023.
“Even if someone wants to base his assumption on our recent visit to him during his birthday, we were there to pay respects to him in his capacity as a former President of Nigeria.

“Again, even if there is nothing, when we are talking of peaceful coexistence, we must give credit to former President Jonathan on the issue of peace. How he accepted defeat in 2015 and resigned to fate. That has qualified him to be a statesman and he is now among our fathers.”

The APC chairman said it was customary for politicians to visit one another and exchange pleasantries.
‌
“Our visit to Jonathan was pronounced because of his status as a former president. That could be why some may think there was something beneath.