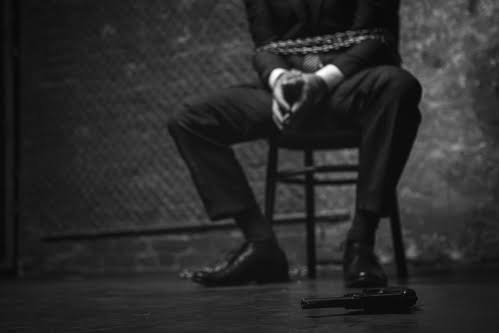 The younger brother to Edo State Deputy Comrade Philip Shaibu, has been kidnapped by gunmen at Irhiri, Benin City.

Jungle Journalist Media Ltd learnt that Mr Frederick Shaibu was kidnapped at about 7 am, while the gun-toting kidnappers left his children in the car, bewildered.

Irhiri community, where the kidnapping took place, is a few metres away from the Ogba Zoo, where Mr Osa Ehanire, manager of the zoo and younger brother to the Minister of Health, Dr Osagie Ehanire, was kidnapped sometime ago, with the Ogba River serving as the getaway route for the men of the underworld, operating with speed boats.

According to available information, the kidnappers were yet to make any contact with the Shaibus as at the time of filing this report.

A family source who confirmed the incident on condition of anonymity disclosed that the kidnappers “attacked him and took him away. It happened at around 7 am when he was going to drop his children in school. The children were left by the gunmen and they took their father away. But the incident has been reported to security agencies, they have not made any contact with the family.”

“It is believed that the kidnappers came through the river because people who saw the incident said they went through the bushes in that area that leads to the riverside. Security agencies have been informed and they are doing everything possible to ensure that he is released unhurt and be reunited with his family,” The family source revealed.

The Edo State Police Command Police Public Relations Officer (PPRO), Chidi Nwabuzor, said, “I am not aware of this development yet but I will find out. 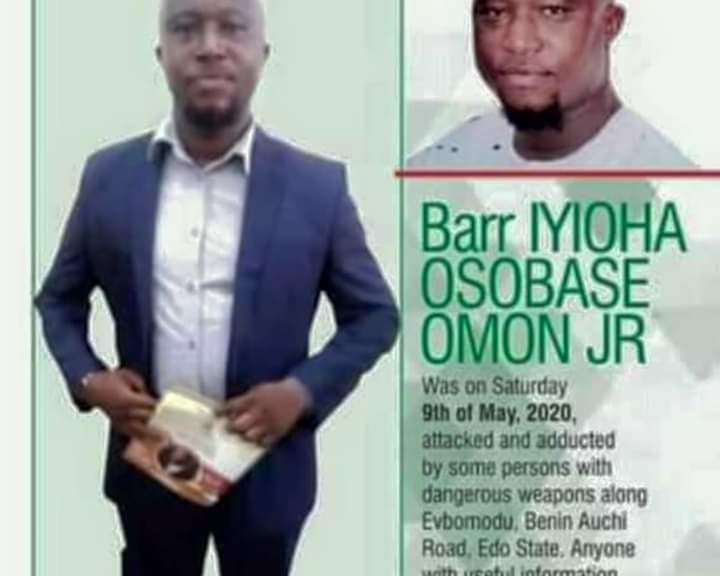 A Benin based Barrister, Omon Osobase Iyoha Jr, was reportedly beaten to pulp and whisked away by unknown assailants in Benin City, Edo State.

As at the time of filing this report, his whereabouts is still not known.

According to a report, an eye witness who spoke confirmed the abduction, disclosing that the kidnapped barrister was whisked away while relaxing at a bar.

“He was at a bar relaxing and saw some persons arguing and he tried to intervene and it didn’t go down well with one of the groups.

He quickly stepped away, but unknown to him one of the boys, who happened to be the son of Afro, convicted on murder charges in Aduwawa, Benin City was in the gang.

When Afro’ son returned with his gang, they descended on the bar, while other people ran away, Barrister Iyoha was not so lucky as he was beaten to pulp before being whisked away.”

The source who pleaded anonymity went further adding that the wife went to the Aduwawa police station to report the incident.”The next day the wife reported the matter to the Aduwawa police station and the DPO put a call through to Chief Afro, who was recently released from prison informing him of what his son had done. Chief Afro called his son, and the son told his father that the Barrister would be freed. But as we speak, it’s being five days without hearing from him. We don’t know if he is alive or not,” he said.

When Barrister Iyoha’s wife was contacted, she confirmed that her husband was missing, but declined speaking further on the matter.

The Edo State Police Public Relations Officer, DSP Chidi Nwabueze who was contacted on the matter said “yes the case was reported to the Aduwawa Police Station and we are currently investigating the matter, in no time the police would have a lead on the criminals and release the victim.” 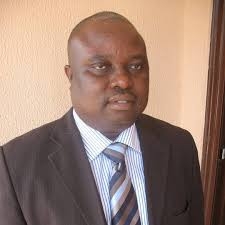 His police orderly was also killed by the gunmen before taking him to their custody.

The incident occurred Friday evening on his way to Ekpoma, along Benin/Auchi highway, at Okhuo River, by Heartland palm plantation.

His driver however escaped unhurt.

The State Commissioner of Police Lawan Jimeta, who confirmed the incident, assured that the police will do everything possible to ensure that he is released unhurt.

He said: “The Commissioner was kidnapped yesterday and our officer with him was killed.”

Jimeta added that operatives of the command has been combing the bush in search of the Commissioner.

Delta State Commissioner for Basic and Secondary Education, Chief Patrick Ukah, has said that the ministry has taken responsibility of the medical bills of those injured and admitted at the Federal Medical Center (FMC), Asaba, following Monday’s foiled abduction of some persons at Azagba Mixed Secondary School, Issele Azagba, Aniocha North Local Government Area, by suspected herdsmen while working out measures to avoid such ugly event in the future.

The commissioner, who was represented by the Director, Planning, Research and Statistics of the ministry, Dr. Prince Felix Akporugo, accompanied by the Director of Schools, Pastor Mrs. Joy Biyibi-Godson, stated this at the palace of the Obi of Issele Azagba, His Royal Highness, Obi Francis Ijeih, when he paid a condolence visit to the community yesterday.

Chief Ukah expressed sadness over the failed abduction of the innocent principal, two vice principals and two teachers who were out for their legitimate duties of educating the students.

He was full of praises for members of the vigilante group in the community for the gallantry they displayed, with support from other security agencies,that led to the rescue of the victims.

The member representing Aniocha North state constituency in the Delta State House of Assembly, Hon. Emeka Nwaobi, who also came on a condolence visit, condemned the attack and prayed for the quick recovery of hospitalized victims.

He requested that the survey plan of the school be sent to him so that, in conjunction with the ministry of Basic and Secondary Education, provision will be made for the fencing of the school.

Speaking during the visit, Obi Ijeih appealed for the extension of the tarring of the road leading to the school and the fencing of the school to provide security for the teachers and the students.

The President General of Issele Azagba Youths Association, Mr. Kenneth Ogegbu, frowned at reports in some sections of the media that the people of the community attacked the herdsmen. He clarified that the community went after the attackers, who were armed with sophisticated guns and other weapons, to rescue members of their families and loved ones. 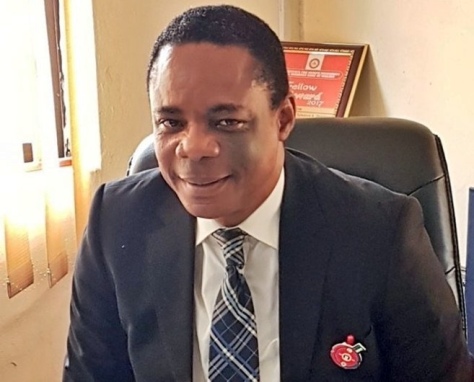 The Edo State Governor, Mr. Godwin Obaseki, has expressed appreciation to security operatives and members of the public for the safe return of abducted Chief Medical Director (CMD) of Irrua Specialist Teaching Hospital, Prof. Sylvanus Okogbeni, calling for calm and vigilance among residents.

The governor, who said this in the wake of the release of the CMD, commiserated with the families of security officials killed during the kidnap incident.

In a statement by Special Adviser to the Governor on Media and Communication Strategy, Mr. Crusoe Osagie, Obaseki assured that government will not spare resources to ensure peace and security is sustained in the state, noting, “We are grateful to members of the public for their support and security agencies for their professionalism towards the release of the CMD, Prof. Sylvanus Okogbeni.

Obaseki added: “The state government commiserates with the fallen police officers who put their lives on the line as first responders and I urge the families left behind to be strong and rest assured of government’s support in these extremely difficult times.

“We commiserate with the State Police Command over the loss of their colleagues and assure that government is strengthening its collaboration with all security agencies and deploying more resources to ensure that security is beefed up in the state to prevent the recurrence of this kind of incident.”

This is as the Edo State Branch of the Nigerian Medical Association (NMA), is jubilating over the release of their colleague, with the doctors calling for improved security in the state.

Chairman of NMA, Edo State Branch, Dr. Valentine Omoifo, who briefed journalists at Doctors House, Ugbowo, Benin City, said that they had planned a protest in Benin City for Wednesday and had mobilised their members, only to get the good news of the CMD’s release.

According to him, “the association expresses its gratitude over the release of the CMD, which forced us to shelf a protest planned to register our displeasure and concern over his continued stay in the kidnappers’ den.”

He charged the state government on improved security in the state, calling for the government to explore the option of community policing to stem the tide of insecurity.

He also called on doctors at Irrua Specialist Teaching Hospital to sheath their sword and resume operations, noting that the doctors will not relent in discharging their services in the state. 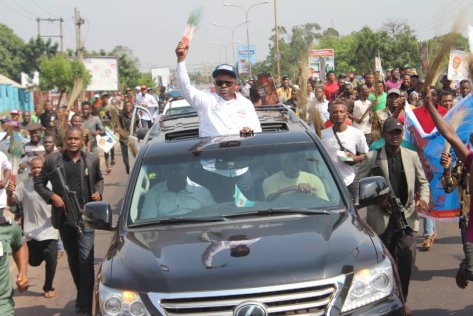 THE attention of Aka Ekpuchi Ọnwa Campaign Organization has been drawn to a failed but callous attempt by some never-do-wells to frame up the All Progressive Congress (APC) Senatorial candidate for Enugu East Senatorial zone, Prince Lawrence Ezeh in a kidnap saga.

These never-do-wells had on Wednesday, 23rd January 2019 played out a very poor script on Ovu bridge along the Nkanu East road feigning that they were kidnapped. It was an attempt to blackmail Prince Ezeh, knowing that he is surely and gradually coasting to victory.

It’s unfortunate that enemies of Enugu East Senatorial zone who are scared of the coming good leadership of Engineer Lawrence Ezeh are running from pillar to post in an attempt to discredit him in order to create reasons to call him a bad name.

Facts check reveal that the same elements allegedly brought down the statue of Governor Ifeanyi Ugwuanyi in Mburubu, and tried to frame it on the Prince. Their efforts paid off as they were given political appointments by the government.

They have also made frivolous attempts to stop our principal’s ambition at the court using APC elements who lost out at the primaries. That also didn’t work.

They are now trying to cook up this story of kidnap which they believe is the last resort, to criminalise our candidate and bring down his popularity.

Barely one week ago, yet another attempt was made on the life of Prince Lawrence Ezeh during his campaigns at Iva Valley Primary School, Enugu. The hoodlums who traced the campaign train were apparently intimidated by the crowd, and out of frustration, set fire on one of the campaign buses before they ran off.

The general public should bear in mind the character of the opponent of our principal, who is the candidate of the People’s Democractic Party (PDP).

Everyone who know Enugu well is aware of the kind of things he is capable of doing and his antecedents when he was governor.

Aware that this is most likely his last political outing, and that he is heading for another failure, one can only imagine what he would do in order to win in the coming elections.

We hereby wish to state categorically that we have been aware of all these fabrications being incubated to bring down the towering image of Prince Ezeh.

Ordinarily, we would have best ignored them, however we are constrained to speak up, on account of the severe implications of these fabrications.

Be aware that no one can stop the fortunes of Enugu East Senatorial zone this time, which is coming through Prince Lawrence Ezeh. Aka Ekpuchi Ọnwa, no hand can cover the moon.